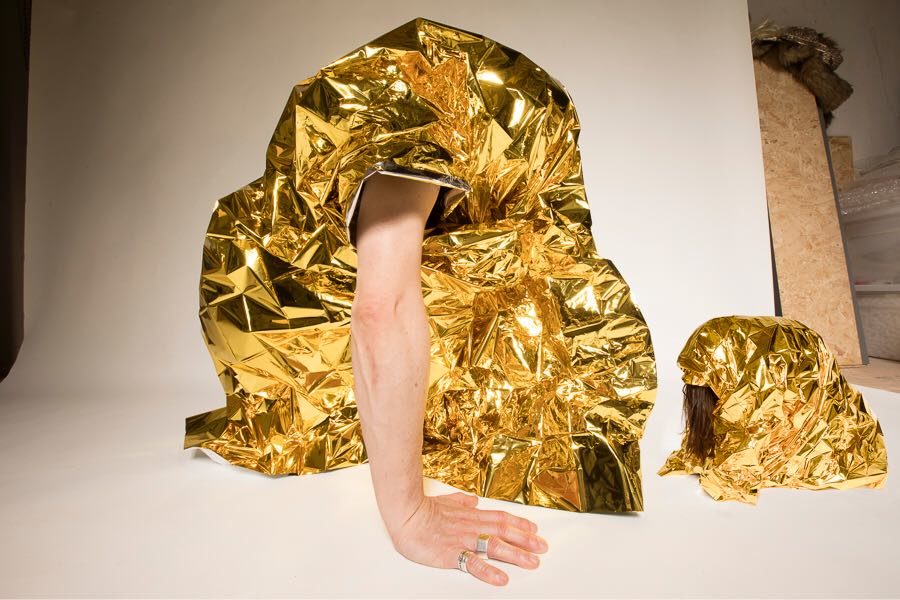 In the musical world of SpermChurch rhythm is the focal point. Sannety has designed a unique software instrument that explores micro-rhythms not unlike Carnatic or gamelan music. This instrument allows her to play with temporal gestures & specific parameters by using algorithms, building a world of percussive sounds inspired by genres that approach rhythms with more adventure than a 4/4 bar has to offer. The role of the bass in this group leans toward the abstract as Trevor utilizes an array of distortions, octave displacement and alternate tunings. With the addition of two percussionists sharing duties on pitched and non-pitched instruments (gongs, cymbals, vibraphone,  metallophones, snare drums, etc) SPERMCHURCH + DRUMS further deepens our exploration of polyrhythms, auditory illusions and the relationships between pitch and rhythm.

Sannety is a Dutch-Indonesian electronic musician who originally played bass and trumpet. She graduated from the Amsterdam Conservatory in 2004 and studied in the Manhattan School of Music Masters Program in 2005. Her recent activity includes a commission to compose a piece for the Van Abbe Museum in Eindhoven, the premiere of new work (with contemporary dance) at the STRP festival and residencies at DansBrabant in Tilburg, CLOUD Dancelab in The Hague and P.A.R.T.S. in Brussels. She has played solo concerts at the Bimhuis, Lantaren Venster, De Ruimte as well as venues in Brooklyn, NY. She has received grants from Fonds voor Podiumkunsten, BKKC Impulsgelden, Stichting Cultuur Eindhoven as well as NUFFIC Talentenbeurs, Prins Bernhard Cultuurfonds, and VSB fonds in the past. Last year she ran a lecture series on contemporary electronic music at Natlab, Eindhoven.

William Winant is a world-renowned new music percussionist, a Visiting Lecturer at UC Santa Cruz and teaches at Mills College & UC Berkeley. He is principle percussionist the the San Francisco Contemporary Music Players and has collaborated with some of the most innovative musicians of our time including John Cage, Iannis Xenakis, Pierre Boulez, Frank Zappa, John Zorn and Lou Harrison among countless others. For 8 years he was Artist-In-Residence at Mills College with the critically acclaimed Abel-Steinberg-Winant Trio which premiered over 25 new works worldwide.

Trevor Dunn has been a professional freelance musician/composer since 1986. He graduated from Humboldt State University in California where he performed Koussevitsky’s Concerto for Double Bass with the HSO. In 1990 he was commissioned by the Elaine Kaufman Cultural Center to write a solo bass piece for Jon Deak which premiered at Merkin Hall, Lincoln Center. As a bass player he can be heard on over 150 recordings and most recently released a disc of original chamber music on Tzadik. He co-founded the avant-rock band Mr. Bungle and has toured the world extensively with Fantômas, John Zorn, The Melvins and many NYC-based jazz ensembles. Trevor leads his own trio-convulsant, a rock band MadLove and composes for film.

Ches Smith studied percussion with William Winant at Mills College and currently leads several of his own ensembles in NYC as a drummer & vibraphonist. His trio with Craig Taborn & Mat Maneri debuted a record on the ECM label. His quintet These Arches focuses on timbre and compositional catalysts for improvisation. Congs For Brums is a solo project that includes electronics. Ches also works extensively as a sideman notably with Marc Ribot’s Ceramic Dog, Tim Berne’s Snake Oil as well as with Vijay Iyer, Dave Holland, Dave Douglas, John Zorn and many others.